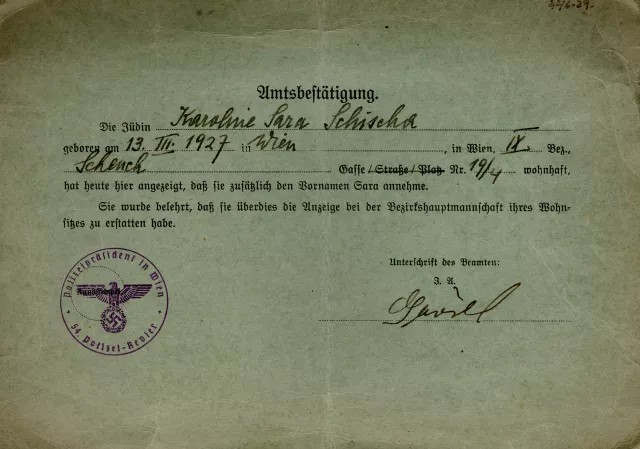 This is an official confirmation from 1938, issued shortly before I emigrated to England with a Kindertransport, stating that i took on the name Sara as a second first name. This information actually sounds as if I had decided to take on Sara as a second name, which i hadn't.

The card says: "The Jew Karoline Sara Schischa, born 13th March 1927 in 1090 Vienna, Scheuchgasse 19/4, thus states to take on the name Sara as a second first name. She was informed to hand in the information at the district authority office. of her place of residence.

My uncle Gottfried Freudmann had connections with the Bnei Brit lodge, a Jewish social organisation. Bnei Brit means 'Children of the Covenant', and those lodges exist all across the globe. Back then they helped to save the lives of Jewish children.

The proceeding was such that someone had to guarantee that the child wouldn't be a burden to the British state. Children who had such a guarantee received a permit and were allowed to emigrate to England with a Kindertransport but without their parents. There were girls, boys and even babies in these Kindertransports - it's hard to imagine what it was like today. No one ever told me that my parents would follow me to England, but I never gave up hope they would.

Each child had a red plate with a number put around the neck. A plate with the same number was put onto each child's suitcase. That's how I arrived in England. I didn't speak a single word of English. Three children of our convoy were dropped off at the train station in London and taken into a hostel from there. The hostel belonged to the Bnei Brit lodge, and there were mainly children from Germany there, so everyone just spoke German.

I only realized how courageous my parents were later, when I already had children of my own. It must have been terrible for them to bring me to the railway station. I was excited back then and understood that it was better for me to go away. I wasn't angry with them for sending me away. At the time I didn't even think of the possibility that I may not see my parents again.