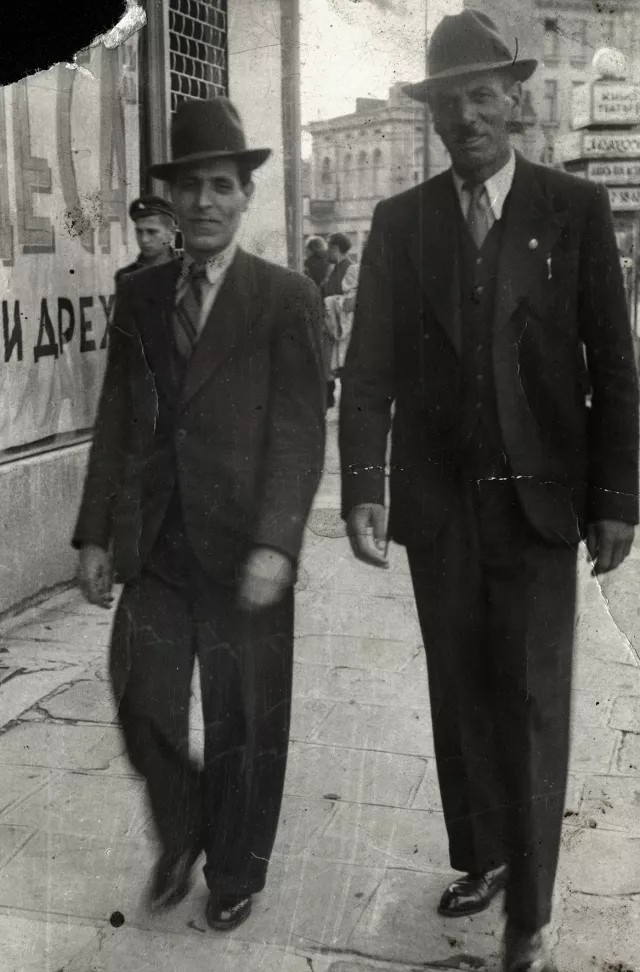 Photo taken in
Sofia
Decade
1940
Country name today
Bulgaria
Country name at time of photo
Bulgaria, 1878-1945
Name of the photographer / studio
Prolet photo studio, Sofia
First from left
My father Haim Iakov with his friend Buko Manon. The photo was taken on Targovska Street in Sofia in the 1940s. Buko Manon was in a better financial situation than my father. I don?t remember what he did for a living. Here they are at a ?man?s? walk in Sofia. My father used to go out regularly for a walk on the weekends. My father was a handsome man, even when he grew older. He always very tidy, always carrying three handkerchiefs in different pockets. He devoted considerable time to his morning toilette - teeth, ears, nose: everything. He was really good-looking and his nose was of the 'Jewish kind' - a big one. He was fond of music. I knew the overtures of several operas through him. The Barber of Seville was his favorite. As soon as he got up in the morning he started whistling. He adored music. I don't know how he had learned them, but he knew all the overtures. My father had a nice job as a bookbinder. Every Sunday he used to go out, quite often without my mother. It was my mother's mistake. Instead of wasting 4 or 5 leva on the weekend, she preferred to save for the household for the rest of the week and therefore stayed home. She had a little stool that she used to put in front of the door so that she could to sit and chat with the other women. When I was old enough I began to feel sorry for my mother that she didn't go out on Sundays. But it was not only my father - all men used to behave like that. My parents' circle of friends was Jewish. All my father's friends were Jews. My father was a wordly person, he only visited the synagogue on major holidays and only because other people went there, too - he did it for the sake of socializing.
Open this page