Anna Danon with children of her close friends

Anna Danon with children of her close friends 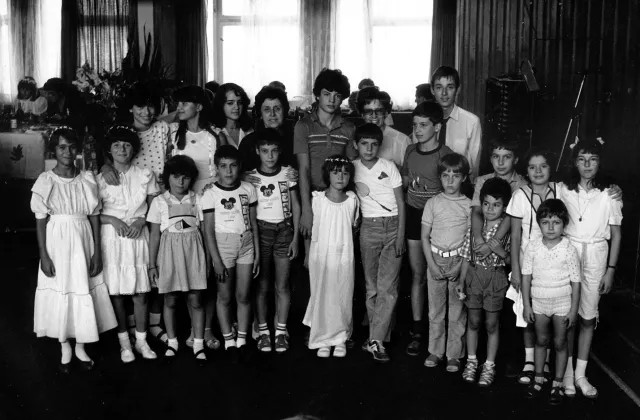 Liberated from
Internment
Kiustendil
These are all children of our close friends, mostly Jewish, whom I have treated (not children from the polyclinics? district) at my daughter Raia Danon's wedding. The photo was taken in Sofia in 1985. It was a big wedding. There were lots of people, including the children I treated. My daughter was born in 1961. She graduated in Spanish philology and currently works as a Spanish teacher at the Spanish high school in Sofia. We didn't really raise her in the Jewish traditions. In socialist times we kept Sabbath mostly because of my mother (even after her death also), as she respected and insisted on that. But I must say that we weren't that strict and we didn't keep the kashrut, like in prewar times. But we often told Raia about the Holocaust. She simply grew up in such a circle; all our friends are Jews. She has developed a sense of belonging to the Jews without being a maniac. Her husband is Bulgarian. She often brings her children to Betam, the Jewish cultural house. Lately there have been many activities there - many clubs - for children, for pensioners, etc. They also organize children's summer and winter camps. My grandchildren attend the events when they can. My daughter considers herself a Jew, but my grandchildren do not. My granddaughter Anna often tells me that she is not a Jew, but a Bulgarian. I have to explain to her that she is a half-Jew also. She considers that being a Jew is not a very good thing.
Open this page