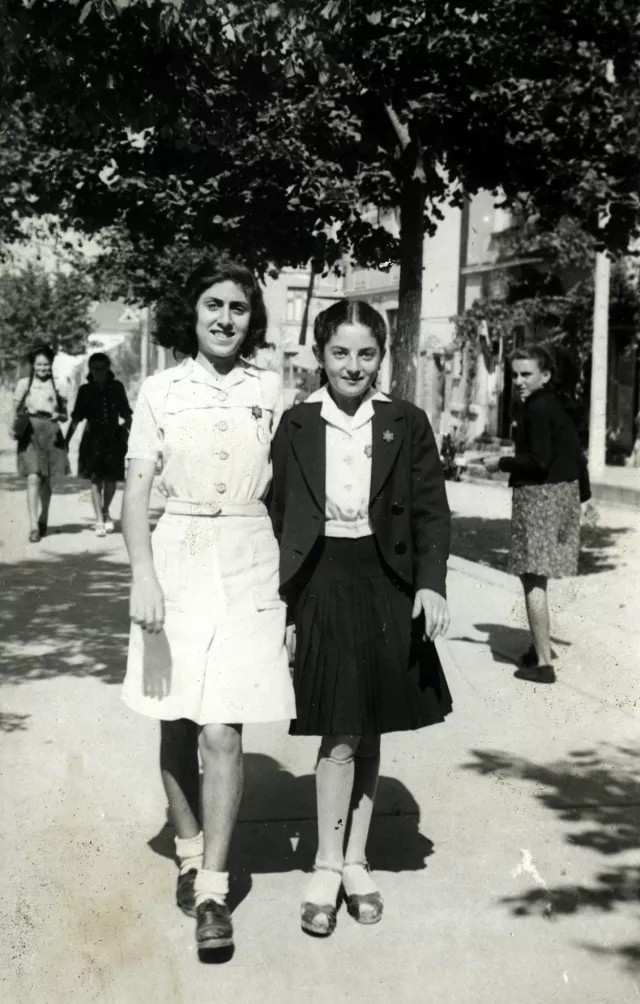 Here I am with my cousin Miriam during the internment in Kyustendil in 1943. This is the main street. We are wearing our [yellow] badges.

Before the Holocaust there were various manifestations of anti-Semitism (beyond the governmental policy). For example, relatives of ours from Kyustendil were complaining that a boy who was a Brannik was constantly harassing them. But here, in Sofia, in our close circle of people, there was no such thing. When a rumor spread that Jews were gathered in camps, enormous fear, actually paranoia, rose among us that something very bad was about to come. We received letters - orders for internment - that stipulated on which day, at what time, with how much luggage and where we had to report ourselves. A real tragedy took place on the streets of our quarter. My eldest sister, Klara, was about to be married and she had prepared a dowry for herself. But it had to be sold with the rest of our house and household goods. We took everything out to front of the house and the neighbors and other people bought it. We were only left with a few bundles.

The first town that we were ordered to go to was Vidin. We didn't know anybody from there. Later we moved to Kyustendil. It was better in Kyustendil because we settled in my mother's house. We had a whole room, and more space. My father took a part-time job - per day, even per hour - whatever he was able to find. We, the children, were bigger, so we went to the town's agricultural school every day and we were given tasks there. The masters of the school, especially the woman, were very kind. She always gave us something to eat and to take home. I remember my eyes being wide open when I saw that the other children were eating slices of bread with real butter. I have always loved butter very much but I could only watch. Our food usually consisted of a slice of butter with plum jam, which I hate even now.

For a year or so I worked in a ladder mending atelier in Kyustendil. This is how I made a living. Ester became a partisan. It was a real tragedy at home because it happened in the most difficult years, in 1941/42. My mother cried for days and days while my father said that perhaps the partisan-communists would bring us something better. We lived in constant fear. We were afraid that they would find Ester, or that they would come here looking for her. And our fears were justified. Within a month or two, the entire family of Iosif Kamhi - who had joined the partisan detachment with my sister - was sent to the Kailuka concentration camp in Pleven. We were horrified. They were sent there because their son had become a partisan. Anyway, they [the authorities] didn't touch us. I don't know why. Perhaps a good angel had saved us. There were no victims from our family. But the camp was set on fire and our friend Iosif's mother burned to death there. Another story - one evening he came across my sister holding paint and a brush. She had written anti-fascist slogans on the walls. Instead of provoking a scandal, he simply told her to be careful, because it was a dangerous work.