Anna Danon with her classmates

Anna Danon with her classmates 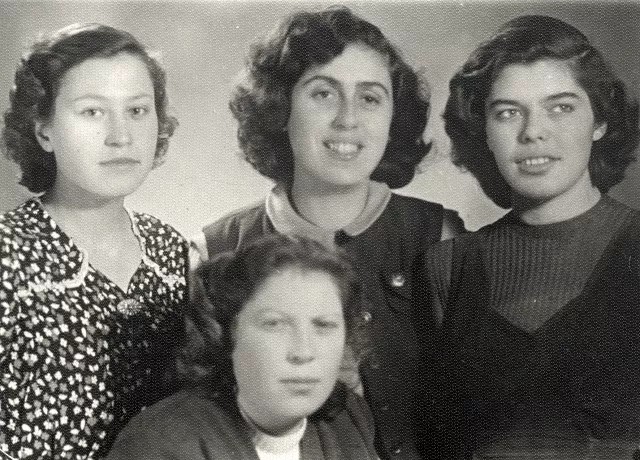 Liberated from
Internment
Kiustendil
This is me (centre) with my high school classmates Maria (on my left), Velichka (on my right) and Sheli (sitting in front). Sheli went to Israel and worked as a laboratory assistant. Velichka worked in the National Savings Bank and Maria worked as an official also. We still keep in touch. This photo was taken in Sofia in the 1940s. With my sisters we attended elementary and high school at the Bulgarian schools, even though most of our Jewish coevals attended the Jewish school. My father had never been a slave to those things. Generally he had progressive views and didn't have concrete political convictions. I can definitely say that there was no anti-Semitism in school. I even remember that we studied religion at school and our teacher Miss Antonova used to say before the beginning of the lesson: 'Children, if there are any Jewish kids, they are allowed to play outside, it is not obligatory for them.' But I was a real 'grinder', striving for her attention, and when she asked questions about the different proverbs of the Bible, I fell over myself to participate. Once she said: 'Shame on you, children! Anna is an Israelite and look how assiduous she is in our classes!' I was a good student and because of that I took part in the ceremony for the opening of the school year reciting 'I Am a Child of Bulgaria' every year. [This is a famous poem by Ivan Vazov, a doyen of Bulgarian literature.] And I recited it with such pathos! My favorite subject in high school was Bulgarian, and even now I help my granddaughter with learning it. As a child I visited a colony [children's summer camp]. As I was physically very weak as well as needy, they always included me in those colonies. I have visual memories from St. Konstantin and Elena [a Black Sea resort]. Almost every summer they used to list me in a colony. I was such a crybaby. From the first day to the last I used to cry for my mummy. My parents didn't have the opportunity to go on vacations and they were happy to send me, at least my food was provided there. I graduated from high school in Sofia after the war. During the internment in Kiustendil I tried several times, but I wasn't allowed to study.
Open this page