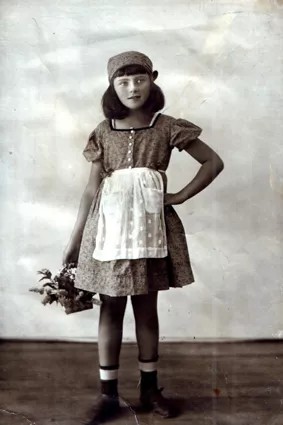 This is my father's younger sister Miriam Shaz (nee Rokhlin). This photo was taken in Tallinn in 1922.

After getting married my grandmother was a housewife. It was only my grandfather that was the breadwinner. They had three children. My father, Jacob Rokhlin, born in 1910, was the oldest. Jacob was the name written in his documents, but for some reason, my father was called Max all his life. I have no idea, why. Even when my father died and his acquaintances read about it in the obituary section of the newspaper, they thought that the newspaper had just confused the names. My father’s sister Miriam was born in 1913, and Boris was born in 1915.

My father’s sister Miriam finished the Conservatory and worked as a music teacher. Miriam married Moisey Shaz, a Jewish man from Tallinn. Miriam’s husband came from a very religious family, and they observed all Jewish traditions at home. Miriam had two sons, Eugene, named after Grandmother, and Leonid.