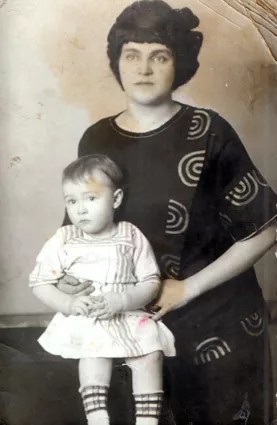 This is my paternal grandmother Eugenia Rokhlin (nee Chapkowski) with her first baby, my father Jacob. This photo was taken in Tallinn in 1911.

My grandmother's family had moved to Tallinn from Poland. My grandmother Eugenia Chapkowski was born in 1888.

After getting married my grandmother was a housewife. It was only my grandfather that was the breadwinner. They had three children. My father, Jacob Rokhlin, born in 1910, was the oldest. Jacob was the name written in his documents, but for some reason, my father was called Max all his life. I have no idea, why. Even when my father died and his acquaintances read about it in the obituary section of the newspaper, they thought that the newspaper had just confused the names. My father’s sister Miriam was born in 1913, and Boris was born in 1915.

My grandfather celebrated Jewish holidays at home and went to the synagogue on major holidays. As for my grandmother, I can't tell how deeply religious she was. I have very dim memories of her.

My grandmother died in 1933, when I was two. My mother told me that my grandmother simply adored me. She fell severely ill and she had to go to hospital. She recovered, and the family came to take her home, when all of a sudden she had coronary thrombosis. She died instantly. It was a premature death. My grandmother was buried in the Jewish cemetery in Tallinn.