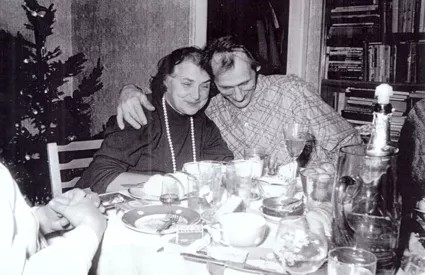 This is me and my husband Veljo Vee. This photograph was taken at our home in Tallinn in 1993. We were celebrating my husband’s 60th birthday.

Perestroika ended with a putsch [34]. This was a period of concern for all of us in Tallinn. We watched the news and there was a feeling of fear. During perestroika life was changing for the better, and it was impossible to imagine that things could go backward with the Communist Party taking the lead again.

During the putsch a tank division entered the city. The military intended to capture the TV Tower. This was when I could clearly observe a separation between the Russians and Estonians. Estonians came out onto the streets to construct barricades, and Russians headed to the parliament to capture it and make it easier for the military. They were for the Soviet regime. Thank God there was no bloodshed. The Estonians Government proved to be very reserved and prevented whatever provocations. Meanwhile the plotters in Moscow were arrested and shortly afterwards, Estonian declared its independence. We were very happy about it.

My father died in 1972. He was buried in the Jewish cemetery. My mother lived with my younger sister Tamara. My sister’s husband died young of cancer. My father also died of cancer.

When the state started giving the property that had been nationalized during the Soviet time, back to its former owners, their house was returned to its initial owners. The new owner partially compensated the cost of their apartments to the tenants, but this wasn’t sufficient to buy new lodging in Tallinn. However, nicer apartments were available in the suburbs of Tallinn.

My mother and sister bought a three-room apartment in the vicinity of the city. They were happy to have it. They moved there in summer 1998. In winter my sister didn’t feel well and went to see a doctor. She happened to have late-stage cancer. This couldn’t be helped. My sister died in spring 1999. How she had dreamed to celebrate the new millennium and our mother’s 90th birthday… I still feel guilty since I am the oldest, but it was my sister, who died first, though she was 14 years younger than me. This was hard for my mother, too. She lives alone. I try to visit her, but I can’t go to see her often. My mother is 96, but she keeps herself busy. She knits nice mittens and socks, and she has her clients.

I have taught Estonian at courses, schools and kindergartens for over ten years. I also give private classes. I feel like working while I can. My work gives me a lot of moral support. Last summer I had an invitation for the meeting of veteran teachers with the President. Besides, it’s always good to be able to earn some money. Karine will get her education, and my mother needs assistance. However, feeling that I’m needed is very important for me. My sons Mati and Tarmo live with me. They are single, and they are not easy-going whatsoever. My husband died a year ago [2005].