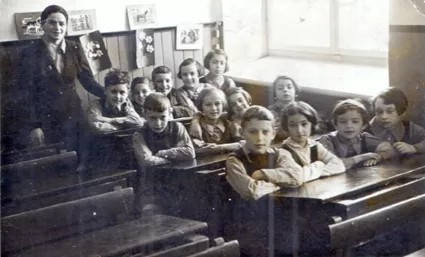 Year when photo was taken
1939
Photo taken in
Tallinn
Country name today
Estonia
Country name at time of photo
Estonia
Sitting the desk in the rear, 4th on the left

This is the first grade of the Jewish gymnasium in Tallinn. We were photographed in the classroom before a class. Our teacher Basia Shneiberg is standing. I am sitting at the desk in the rear. I'm the 4th on the left. My friend Frieda Slomka is on my right. From left to right, at my desk: Harry Hoff, Yankel, I can't remember his surname, Donald Dubrovkin. At the first desk, from left to right: Abram Bass and Nesse, they fell victims to the German occupation of Tallinn. There are two others, whom I don't remember. At the 2nd desk, from left to right: Libert Kantor, he lives in Tallinn now, Dora Vigderhaus, Ester Abramovich and Fanny, I don't remember her surname. This photo was taken in 1939.

When I turned five, I went to a Jewish kindergarten. The children were prepared for the Jewish school in this kindergarten. I improved my Yiddish there. I have very good memories of the kindergarten. Our teacher was Fania Dubowskaya. She was like the sun sending out warm rays around her. Perhaps, Fania influenced my choice of profession.

When I turned six, I went to the Jewish gymnasium. Actually, they admitted eight-year-old children to the gymnasium, while I had just turned six in August and went to school in September of the same year. I don’t know why it happened so. Perhaps, my mother wanted to know how I would manage my studies, considering my insufficient Yiddish. If I failed, they would have sent me to an Estonian school the following year. However, I did well from the very start at school.

On my first day I was so excited that I don’t remember anything about it. All I remember is that I badly needed to go the ladies’ room, but there were strangers around and I was too shy to ask the way. One girl in a red dress came to my rescue and showed me the facility.

There were two classes at school: one Yiddish and one Hebrew. I joined the Yiddish class. The children of wealthy and renowned Jews of Tallinn studied in the Hebrew class, while in the Yiddish class there were children from common families. We had the same teachers, though. I remember that our teacher of Jewish religion and history was Gurevich, the chazzan of the synagogue of Tallinn. He also taught us singing.

Year when photo was taken
1939
Photo taken in
Tallinn
Country name today
Estonia
Country name at time of photo
Estonia
Sitting the desk in the rear, 4th on the left