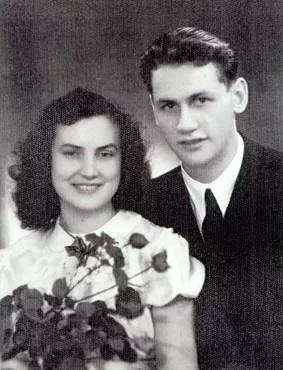 This is me holding our older son Mati Vee and my husband Veljo Vee. This photo was taken in Tallinn in 1960.

I went to work as a lecturer at the Department for Pre-school Education of the Tallinn Teachers’ Training School where I met my future husband, Veljo Vee. Our school also housed a vocational school where Veljo was a student. Later my husband told me that he often saw me in the lobby of our school and thought that I was a student of the Teachers’ Training School. Had he known I was a lecturer, he wouldn’t have dared to talk to me. It was fortunate that he believed me to be a student and approached me. For me, it was love at first sight: it was either to be him, or no one else. We met in May 1956, and in late 1957 we got married.

After finishing the 8th grade at school, Veljo entered a vocational school in Tallinn. When a student, he was drafted into the army, and after the service he continued his studies. Veljo finished the school with honors, and afterwards he went to work as a metalworker at the Ilmarin mechanical plant. At that time, we were married already. At first we lived with my parents, and in the 1960s Veljo received an apartment at the plant.

Our first son, Andreas, died at birth. The position of the fetus was wrong, and the delivery was hard. He didn’t survive. In 1959 our son Mati was born, and in 1961 Vallo came into the world. I desperately wanted a daughter, and we decided to take the risk. In 1966 our third son, Tarmo, was born.

My husband was a metal worker. He worked and studied in an evening school. Later he went to work at an excavator plant. Veljo finished an excellence school to have the highest level of mastership in his trade. He was an advanced worker and made a few improvement proposals. His portrait was on the Board of Honor in Tallinn, and newspapers wrote about him.