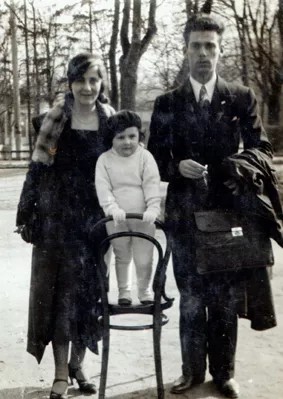 I was born in 1931. My parents gave me the name of Esther. My father worked as a dentist, and my grandfather worked with him. My grandfather was a dental mechanic. There were not so many dental mechanics at the time, and my grandfather was considered a highly skilled specialist. He provided his services to a number of celebrities in Estonia. He was well-respected. My father and grandfather’s business improved, and we moved into another apartment on Viru Street. There were seven rooms in this apartment. My grandfather and father set up a dentist’s room where they received their patients.

We spoke Estonian at home, but it wasn’t because my mother was Estonian. My grandmother and grandfather also spoke Estonian. They knew Yiddish and so did their children. I also knew some words in Yiddish, but not sufficient to communicate in Yiddish. I often mixed Estonian and Yiddish words. I learned to write and read in Estonian at the age of four. I couldn’t understand why some letters were dotted and others were written with a small tilde. I wrote all letters with this tilde saying that it was a fair thing to do. It took me almost a year to write letters properly.

When I learned to read, I spent much time reading. Stories about children were my favorite. I had several Estonian books about children, and I loved them a lot. I knew them by heart, actually, but this never stopped me from reading them again and again. I also liked drawing and spent a lot of time drawing.

My mother had a knitting machine. She knitted nice striped socks for children. Mama also made very beautiful dolls. She bought celluloid heads and made the bodies herself stuffing them with sawdust. Then Mama made lovely dresses for the dolls and designed their outfits. She also made dolls for me. They were my favorite toys. I played with my mother’s dolls and often took them with me to the kindergarten and later to school.