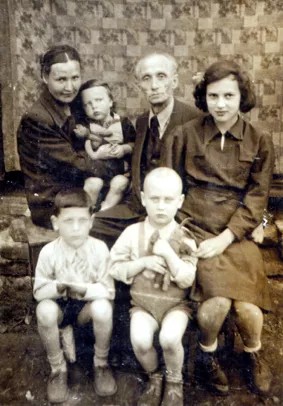 In summer 1945 we returned to Tallinn from evcuation. My father was back home. He went to work. Our family received three rooms in a shared apartment. The Soviet authorities did not reopen our Jewish school after the war. I met with some former classmates. They told me that many had been lost to the war. Actually, all of those who failed to evacuate, perished during the first months of the war.

My father went to work at the medical library in Tallinn. He started as a bibliographer, and later he was promoted to director of the library.

In November 1945 my sister was born. According to her documents, her name is Tamara, but she was always addressed as Maja. I was 14, when my baby sister was born. I loved her so much! I had spent a lot of time with my younger brothers, and when my sister was born, I dedicated much of my time to her. I made notes of everything the children said and the games they thought of.

My brothers and I had no problems with the new Soviet life rules. We had spent over three years in evacuation, and this was something we got adjusted to. I don’t know what my father or mother thought about the Soviet rule. In our family the children were not involved in any political discussions.

In September 1945 I went to the 6th grade of an Estonian school. At that time there were schools for boys and girls in the Soviet Union. In our school we had classes for boys and classes for girls. We only met at all-school events.