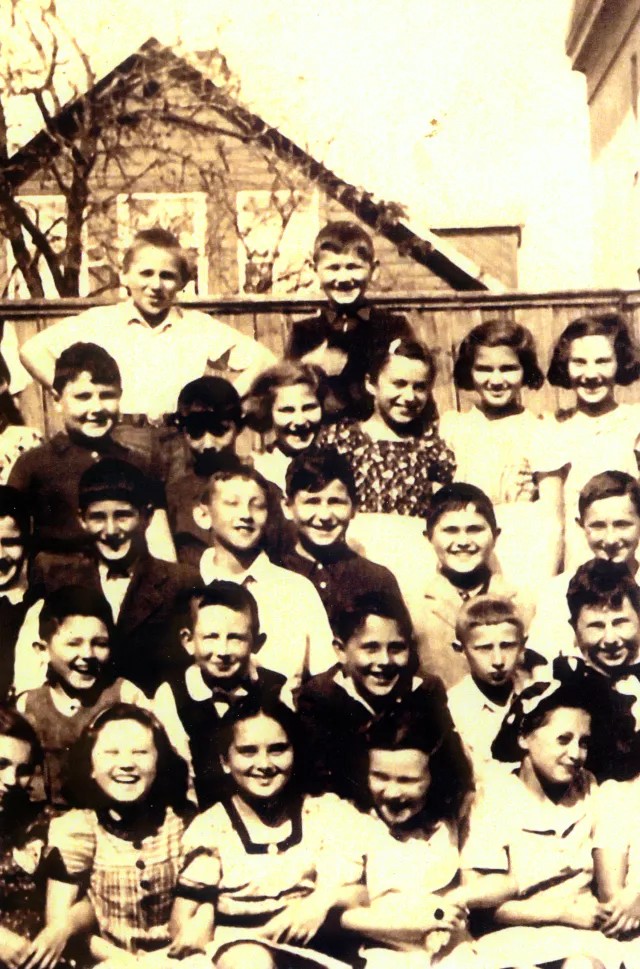 This is the 4th grade of the Jewish elementary school where I studied. I am in the center, 2nd row, my friend Zandel is beside me. The 2nd on the left in the 2nd row is Tanur, Soloveichik is beside her, unfortunately, I don't remember their first names. I don't remember any other names. The photo was taken in Kaunas in 1939.

I went to the preparatory class at the gymnasium where my brother Azriel also studied. Jews constituted about 30% of the total population of Kaunas, and there were several Jewish schools there: a Yiddish Jewish school, the technical Jewish gymnasium, the humanitarian gymnasium and a religious school. In my gymnasium the subjects were taught in Hebrew. Soon I started talking to my parents and my brother in Hebrew. I had Jewish friends. One of them, Zandel, was my classmate and so were the girls Tanur and Soloveichik. These were their last names; unfortunately, I don't remember their first names. Regretfully, our communication didn't last long. Zandel and Tanur perished during the occupation, and Soloveichik and her family were deported to Siberia. I don't know what happened to her. I also played with other children of different nationalities, and we got along very well.

There were many Jewish organizations in Kaunas. I liked performances of the Jewish theater where we went with my class. I liked music and liked listening to the records my father played on the record player. I started learning to play the piano, when I was about five years old. We had a piano delivered from Germany. I didn't like playing it but preferred playing with my friends and Lev. I played table tennis for some time. There were Jewish organizations in Lithuania and in Kaunas. I didn't like Betar members, who I thought were too aggressive. Maccabi and Hashomer Hatzair were closer to me. There was another organization in Kaunas, which collected money to purchase land in Palestine, and for the construction of kibbutz communities and establishment of the Jewish state. There was a nice money box, where Mama and Papa always dropped change, in our living room. Every week a representative of this organization visited us. We opened the 'cannon' and he collected the money.