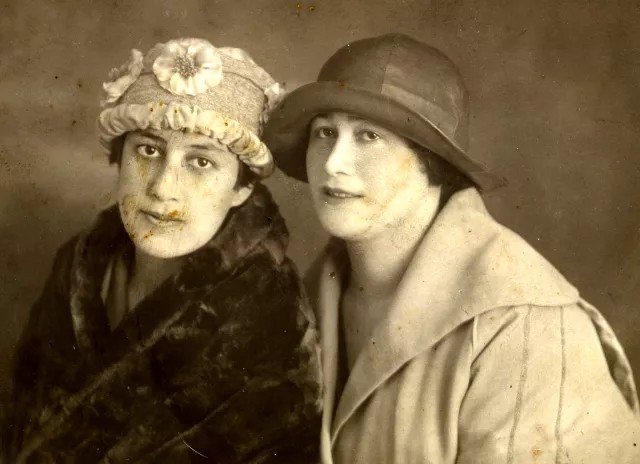 On the left is Hilna Frenkel, my mother's sister, and my mother, Bertha Jafet, is on the right. The photo was taken in 1927 in Kaunas.

My mother was born in 1893. She didn't work for some time after finishing the gymnasium. She went to Riga from Perm. In Riga she entered the university, but she didn't study there long. Shortly afterward she met my father. They got married and moved to Berlin. I don't know whether my father managed to take a part of his capital to Berlin, or whether my parents went there having nothing.

Mama's youngest sister Hilna, much loved by all brothers and sisters, was born in 1907. Hilna married Lazar Frenkel, a Jewish man from Kaunas. She gave birth to their son Lev, but she didn't enjoy her family life. She died in 1933. Her husband never remarried. He hired a nanny for his son. This lady became Lev's second mother. Lev and his father were prisoners in the Kaunas ghetto. They perished during its liquidation. I know that Mother had another sister, but I can't remember her name. She lived in Perm with Grandmother Genia and had two sons. One became an architect and artist, and the second one was a TV producer. They live in Perm, but I don't know them.