Bertha Jafet with her son Azriel

Bertha Jafet with her son Azriel 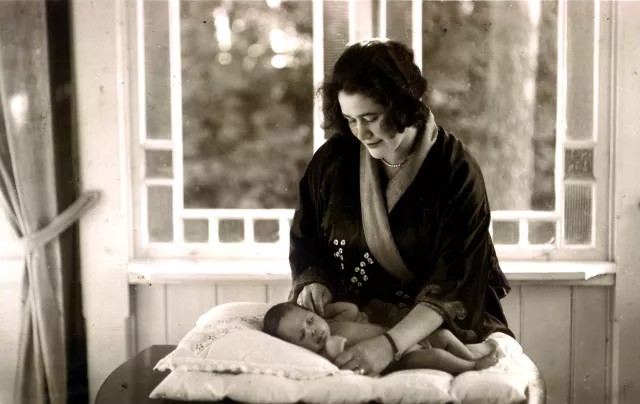 This is my mother Bertha Jafet with her first son Azriel, in 1925, while on vacation in Buduri resort, Lithuania.

My mother was born in 1893. She didn't work for some time after finishing the gymnasium. She went to Riga from Perm. In Riga she entered the university, but she didn't study there long. Shortly afterward she met my father. They got married and moved to Berlin. I don't know whether my father managed to take a part of his capital to Berlin, or whether my parents went there having nothing. One thing I know for sure is that in Berlin my father started his own business. Lithuania was devastated at that time. There were no essential goods or products being produced. Taking advantage of this situation, my father opened a small store in a little town near the German and Lithuanian border. My parents were doing well. At least I know that they managed to help their brothers and sisters. However, my parents, particularly Mama, missed their motherland. Since there was no threat of communist repressions, as Lithuania and Latvia became independent bourgeois countries, my parents moved to Kaunas in Lithuania in 1923.

My father became a dealer for British textile companies. Britain manufactured wonderful woolen fabrics, known all over the world, and exported them to Lithuania. My father was a wholesaler. In 1925 Mama gave birth to my older brother Azriel, named after my father's father.

My mother didn't work. She had a cook and a housemaid to help her about the house. Mama made daily menus, supervised the cook, tried the dishes and added spices to them. Mama knew all culinary secrets of the Jewish cuisine, but we also had European dishes for our meals. My parents were not religious Jews, though they were both born into rabbis' families.