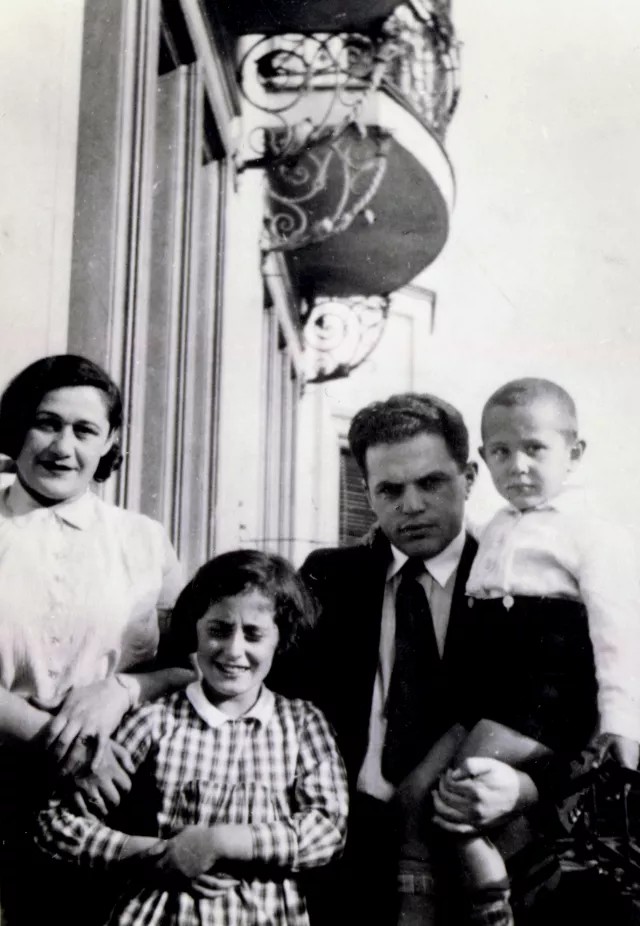 Here you can see my mother Bertha Jafet, my father’s sister Mania’s daughter Mary Dinerman, my uncle Alexandr Jafet and I in his arms. This photo was taken during our trip to Berlin in 1936, on the Dinerman's balcony.

My mother was born in 1893. She did not work for some time after finishing the gymnasium. She went to Riga and entered the university, but she did not study there long because she met my father. By 1918 my father had become a merchant of Guild I. He lived in Moscow. In the late 1920s my father met my future mother in Riga or in Moscow. This was the gloomy period of the Revolution, destruction and expropriation process, which resulted in poverty at best and at the worst it meant exile and death.  Therefore, immediately after they got married my parents moved to Berlin in 1920.

I don't know whether my father managed to take a part of his capital to Berlin, or whether my parents went there having nothing. One thing I know for sure is that in Berlin my father started his own business. Lithuania was devastated at that time. There were no essential goods or products being produced. Taking advantage of this situation, my father opened a small store in a little town near the German and Lithuanian border. My parents were doing well. At least I know that they managed to help their brothers and sisters. However, my parents, particularly Mama, missed their motherland. Since there was no threat of communist repressions, as Lithuania and Latvia became independent bourgeois countries, my parents moved to Kaunas in Lithuania in 1923. My father became a dealer for British textile companies. Britain manufactured wonderful woolen fabrics known all over the world, and exported them to Lithuania. My father was a wholesaler. Our family was rather wealthy. I was born on 31st March 1930. I had a beautiful childhood.

Mania, five years younger than my father, lived in Raseiniai. In the 1920s, when my parents' family lived in Berlin, my father's companion Isaac Dinerman, a Jew from St. Petersburg, who was about ten days older than Mania, had become a widower some time before and had to raise his little daughter. My father introduced him to his sister and they got married shortly afterward. A year later their daughter Mary was born. They had a wonderful family and Mania was raising two daughters. When the persecution of Jews in fascist Germany became unbearable, Dinerman managed to move his family to London in 1937. Isaac was a wealthy man. He founded a company in London. Isaac Dinerman died in 1942. Mania inherited his company and became its successful leader.

In 1936 we visited aunt Mania in Berlin. She, her husband and children lived in the center of the city. We stayed in Berlin for about two weeks, but I was too young to remember any details of this trip.

Alexandr, or Alex, as he was called, born in 1913, was the youngest in the family. He also had a Jewish name; I think it was Zalman, since his family called him Zisia. Alexandr had elementary education. He also moved to Kaunas where he married the daughter of a sawmill owner. He worked at this sawmill. In 1941 Soviet authorities deported him and his wife Rosa to Siberia. I think it might have been a mistake. They might have been looking for my father, who lived abroad, and Alex suffered for having the same surname as my father. At least, there were no evident reasons to deport him: Alex' family wasn't a wealthy one. Alex' wife died somewhere on the way. Alex spent over 17 years in exile in Irkutsk region. When he returned to Lithuania, there was none of his kin left there. He and Rosa had no children. He lived in Lithuania till 1973, celebrated his 60th anniversary there and left for Israel where he lived with his sister Doba.