Katarina Lofflerova on a school trip

Katarina Lofflerova on a school trip 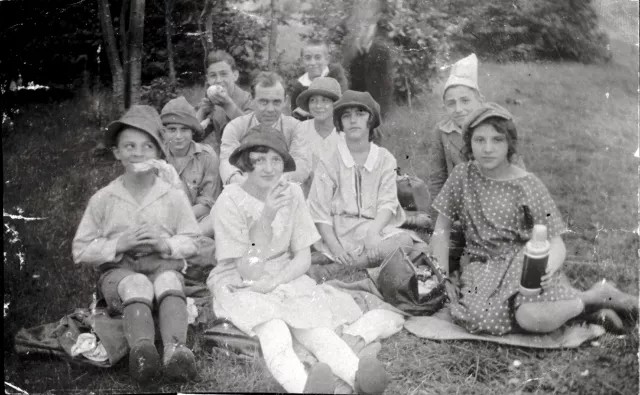 This was taken in the immediate vicinity of Bratislava in 1923, when I was thirteen years old. I'm pictured here with a circle of classmates. I remember it so precisely because after World War II, I luckily came across my photo album which I'd hidden safely away, and in which I noted next to every picture, where it was taken. Our gym teacher, Denes Csisko is in the center of the picture.

We went on school outings from the Lutheran lyceum generally to places around Bratislava - Zerge mountain or Devin. There was no bus to Devin but we could go by boat there. They called it a hiking trip, so we usually had to hike a few kilometers. Our gym teacher, Denes Csisko always arranged these kinds of trips. Everybody brought a 'ten'oclock' [snack] with them. There were thirty-four of us in a class. The majority were boys, there were only four of us girls.

After that, I went to the Lutheran lyceum, which was, at that time, the best secondary school. Those who were preparing for Lutheran or protestant priesthood went there. I had classmates who really became Protestant ministers. It was a first-class school. It was the so-called 'conservative' high school, because aside from Latin, we learned Greek, too. I believe the teachers chose the area of study for most of the students, if they didn't show special aptitudes. If you liked a teacher, whatever he taught was your favorite subject. This happened to me twice. The homeroom teacher, who taught us Latin, was a disgusting guy. My grades weren't bad in Latin, but I didn't like him. But I had a cute, sweet teacher for Greek. I got a one in Greek. I loved it so much, that today I can still read it, and write it.

However, Greek wasn't my favorite subject. History was. We had an excellent, first-rate teacher. In this period, which isn't a good period, 14-15-16 years old, we listened with gaping mouths in complete silence. Though the French Revolution wasn't all that interesting to us. But we knew exactly that we were learning to please him, because we really liked him and he was so kind. History probably left a little deeper impression on me, but after the war, I didn't really have time for it, because I had a job. But I always read profusely everything connected to history, and for many decades I've been interested in history, most recently in the history of the city of Bratislava. I also loved geography, because I was taught by an excellent teacher.