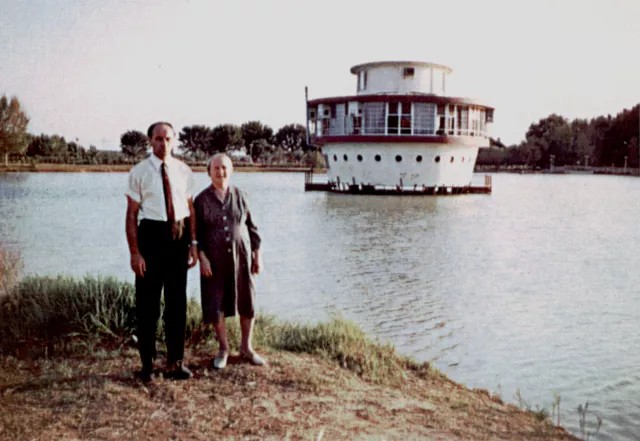 I brought this photo from Israel. This is my aunt Liebe Monchnik, Mama's older sister, and her son Abram Monchnik. They were photographed in the vicinity of Tel Aviv. This photo was taken in 1996.

Liebe's marital name was Monchnik. Liebe's husband Mikhl Monchnik was a shoemaker. Liebe was a cook at the canteen in the Jewish school. They had four children: older daughter Fani, sons Zalman, Abram and younger Motl, who was almost the same age with me.

During World War II Liebe and her family were in evacuation with our family. Their older daughter Fani was a skilled dressmaker. Before Latvia was annexed to the Soviet Union she worked for a wealthy owner of a garment store. Her master sent her to Paris to purchase fabric and latest designs. During the Soviet regime Fani continued working in the garment store. She made clothes for local customers. Their older son Zalman was in the army. Their middle son Abram was retarded due to meningitis in infancy.  He was not subject to military service. Their younger son Motl fell ill with pleurisy, when we were in the kolkhoz. He needed medications and good food, and Fanni worked from morning till night to provide these for him. She didn't have good food herself, giving whatever she had to her brother. When Fani became too weak, she was taken to hospital where they determined she had tuberculosis. She managed to bring her brother to recovery, but nobody could help her. There were no medications, good food or warm clothes.

Then another sorrow hit the family. Uncle Mikhl, working at the shoemakers', talked to other employees, and once he mentioned that life in Latvia was much better before the Soviet times. Somebody reported on him and he was arrested. There were investigations and then a trial. Fani died on the day of the court sitting. My uncle was sentenced to five years in the Gulag. Motl was regimented to the army, and my aunt was left there with Abram.

In 1957 my aunt Liebe and her family moved to Israel after her husband returned from the Gulag. Emigration to Israel was not allowed in the Soviet Union, but Jews could go there from Poland. Aunt Liebe's husband Mikhl Monchnik came from Poland. The family was allowed to move to Poland. From there some time later they moved to Israel. Her son Abram was married. His older daughter Tsilia was born in the late 1940s, and her younger son was born in 1950. They all live in Israel. My aunt and her husband have passed away, and my cousin already has great-grandchildren. We corresponded with my aunt and she sent us pictures. At that time we could never believe that they would be able to visit us.