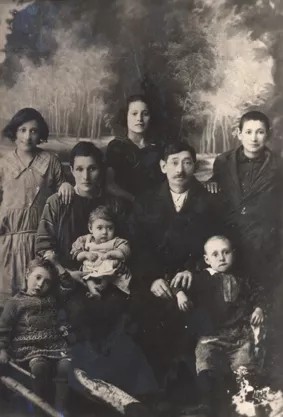 This is my father’s family. These are sitting in center my grandmother Mina Beitler holding her son Chaim, my grandfather Yankle Nison Beitler, their daughter Rachel to the left - son Moishe to the right. Standing behind them, from left to right: their daughters Channa, Tsilya, their son Ruvin Beitler. The picture was made in Zagare in 1927.

The past of my father's family is veiled in mystery, which was later revealed before war. My grandfather Yankle Nisan was born in Lativia in a rich Jewish family Rot. The family had money to burn and grandpa could count on good heritance and bright future. Grandpa served in tsarist army and committed a disgraceful act. He deserted the army with the military chattels. He actually turned out to be not only a deserter, but also a thief. The family renounced him and even bereft him of his family name somehow. I do not know how it was officially done, but grandfather got the last name of Beitler. He must have been bought. Thus, he could not demise anything. Besides, he left his towns. Grandfather, who was now carrying the last name of Beitler, came in Zagare. Here he met my grandmother Mina Brener, a lady from a large poor Jewish family.

Her family was from small town Vieksniai, not far from Zagare. There were frequent fires in small towns at that time as the houses were wooden, heated by the firewood in the stoves. Vieksniai was burnt to ashes for couple of times. The victims of the fire moved to Zagare. The last name Brener meaning the burnt is probably stemming from those events. According to grandmother Mina and other relatives, my great grandfather, Mina's father Samuel Brener was absolutely blind. He was a very handsome man and earned for a living playing hurdy-gurdy. In the Jewish hierarchy those people belonged to the lowest caste. Samuel's family was very poor and was supported by the Jewish community. Samuel's wife, my great grandmother Nora, bore and raised 8 daughters. Samuel and Nora had no sons. There was no job for a street organ player in such a small town as Vieksniai, but in Zagare the girls learnt some craft. Some of them were seamstresses. One of them was a knitter.

My grandmother Mina, born in 1888 was the most beautiful. She must have inherited the genes of her blind handsome father. My grandpa Yankle Nison fell in love with her and asked his parents blessing for the marriage. His being infatuated with a poor lady even added more fuel to the fire and the family conflict got way worse. Their marriage was disapproved by the family, but the got married nevertheless and had lived together for many years. Yankle Nison was physically very strong and he worked as a butcher in the kosher Jewish store. Mina gave birth to 11 children, out of whom 9 grew up and two died in infancy. Children were born almost every year. When grandpa was alive the family scraped through somehow. When he died in 1930, grandma had to earn for a living. She started selling fish. She and her sons Rubim and my father Leibl went to Klaipeda, Latvia to buy fish and sell it afterwards on our market. When she ran out of money, she borrowed it from people and paid back after her next trip.