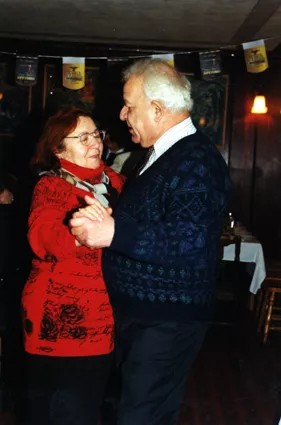 These are my husband and I dancing during Channukah celebration in our Jewish community in Siauliai in 2006.

In 1956 I started teaching Russian in the secondary school in Zagare. I did it for several years. Father often told me that he saw my former classmate at work and found him very pleasant. Once he invited him for a holiday. It was Boris Steinas, a guy from our prewar class. I did not pay attention to him at school as he was lean and tall, with protruding Adam's apple. He behaved improperly and cut classes. I did not like guys like that. Now I saw a good-looking, confident young man. We had lunch and then we started looking at school pictures. In couple of days Boris came to us once again. We had similar fates, families, we enjoyed spending time together and then we fell in love with each other. On 31 December 1959 Boris and I registered our marriage. We had wedding rings. Mother made a fashionable navy blue dress. We had a festive dinner at home, attended by our relatives throughout Lithuania.

After wedding I went to Boris in Siauliai. I worked at school as a Russian language and literature teacher. I was always respected by my colleagues and students.
Boris and I had a very good living. we had polar characters "ice and fire", but our principles were alike. In businesslike issues husband was the leader, in other day-to-day things I was the head. In 1960 our daughter Rita was born and in 1963 - Lana.

Mother helped me raise my daughters. We had a good living. Husband made pretty good money and I also had an income. Every years daughters went to pioneer camps in Palanga, we went to sanatoriums using trade union vouchers. We also did not forget about cultural life. We read all novelties, went to the theaters, cinemas. later husband was given a garden. Then he bought a car and we started traveling all over Lithuania. We also went to Russia.

My mother died in 1985. I left job straight after that as I had to raise my grandson. My sister Nina also helped me. She also became a teacher. She was a headmaster at school. She remained single. She adores my grandson Gedeon. My younger sister Anna also remained single. She graduated from Vilnius university. She had worked in commerce for many years. Then she worked in private companies. Now Anna is retired. She is living in Vilnius. I am bonded with sisters. We talk over the phone every day and see each other often.

We had a pretty good living during the soviet regime. That is why when Lithuania gained independence and Soviet Union broke up [1991], it was a shock for us. It seemed to us that our life collapsed. There appeared anti-Semitists meetings, where communists and the Jews were blamed for all the bad things. It was both in day-to-day life and in press. With time, it eased, and now we find positive things in our independence. Now Jewish community, which was established before the soviet regime, can be revived. My husband Boris became the chairman of Siaulia community. I help him with everything, edit his speeches, reports, make arrangements for the holidays, assists in negotiations with the sponsors. Nina is also with us. Almost every day she comes in the community. I often cook Jewish dishes using my grandmother's recipes. We keep traditions, truly celebrate holidays and try to make a better life for Siaulia Jews in such uneasy times. 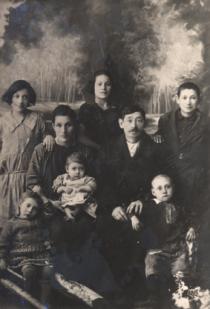 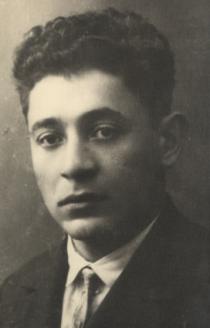 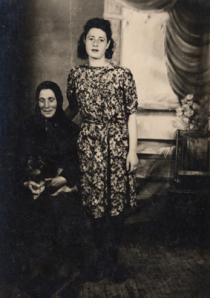 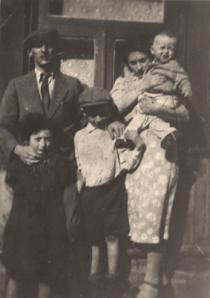 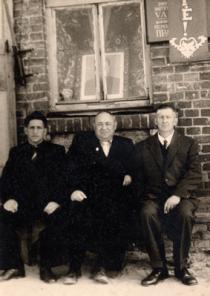 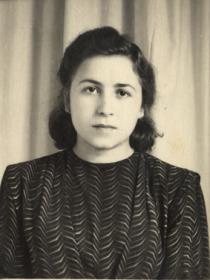 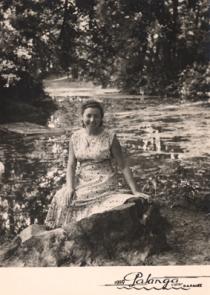 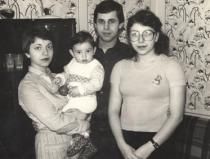 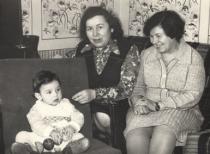 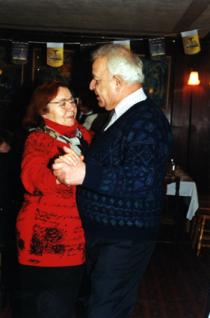