BUDAPEST -- The last time I wrote about Budapest on Centropa I provided an itinerary of Jewish sights and resources, most of them in and around the city's Seventh District, the old downtown Jewish quarter anchored by three grand synagogues forming a so-called "Jewish triangle."

That was eight years ago, and the former Jewish quarter still had the reputation of being one of the city's poorest inner districts. There were some signs of incipient gentrification, but World War II bullet holes pocked many crumbling facades, vacant lots yawned, and the grimy streets were dark and uninviting.
A lot has changed since then.
Much of the District is still neglected. But already at the end of 2007 the New York Times ran a travel story called "Out of Darkness, New Life" that described how the district's "history and recent rise to trendiness" evoke "comparisons to the Lower East Side of New York."
A recent issue of Time Out Budapest magazine went even further, terming the Jewish quarter a major city "bar vortex." In fact, the district burgeons with new cafes, clubs, bistros and wine bars that attract a young, hip -- and often Jewish -- crowd.
At the same time, though, this type of growth has been paralleled by controversial urban renewal projects that have seen many old buildings torn down and replaced by rather soulless modern structures.
A citizens group, OVAS, has been formed to lobby for the protection of what remains -- particularly in light of real estate corruption involved in some of the development schemes. The Mayor of the Seventh District himself, in fact, was jailed last year on suspicion of bribery and abuse of office related to property transactions.
I've maintained a small apartment in the Seventh District for more than a decade. Though I only spend part of my time here, I've been observing the changes in the quarter up close; after all, it's my neighborhood.
In particular, I enjoy the new venues and Jewish haunts that have nothing to do with a nostalgic sense of a vanished past but everything to do with how Jews in Budapest -- and particularly young Jews in Budapest -- are experimenting with ways to build a lively present and, one hopes, a sustainable future.
With this article, I would like to introduce readers to some of the haunts in and around the Jewish quarter that I tend to frequent: whether for breakfast cappuccino or afternoon espresso, for an inexpensive lunch, or for dinner or late night drinks and conversation. Or simply as somewhere to sit and use the free WiFi internet that most venues in the district seem to offer.
As I noted in my earlier Centropa article on Budapest, the Seventh District was the first and most important Jewish quarter in Pest, the flat part of Budapest that spreads out on the eastern bank of the Danube.
Today's downtown Deak Square and the massive red brick Madach apartment complex occupy the site of Orczy House, a vast structure built in the 1700s that was a central focus of Jewish life in Budapest throughout the 19th century.
Orczy House was demolished as part of an urban renewal project in the 1930s. Before that, it served as a self-contained warren of synagogues, study houses, apartments, baths, restaurants, cafes, shops, warehouses, and workshops: the place where many Jews from the provinces first found a home when they moved into the big city.
The broader Jewish quarter eventually spread out from here, with Kiraly street, at the edge of the Seventh, becoming its major commercial avenue, a heavily trafficked thoroughfare lined by many fine neoclassical buildings.
The back streets branching off Kiraly street into the Seventh comprised a dense network of shops, artisans' workshops, and tenements built around connecting courtyards encircled by balconies and tiny flats. At the heart of the district was what is now called Klauzal square, an open space fronting one of the city's district market halls that became the center of the World War II ghetto.
The three main synagogues that form the "Jewish Triangle" are all in the inner part of the district -- the twin-towered Dohany St. synagogue and the orthodox synagogue complex on Kazinczy street, both in use and both fully restored and refurbished in recent years, and the Moorish-style synagogue on Rumbach street, which still stands disused and in disrepair, after restoration was halted for lack of funds.
Most of the cafes and other venues I mention are within a ten-minute walk of these synagogues, and are also close to two synagogues run by Chabad, one on Deak square and one on Vasvary Pal street.
These are only a few of the many cafes and restaurants in the district -- but they tend to be the one that I (and my friends) frequent.

With a mezuzah on its front door and many Jewish-themed programs, this (unfortunately often very smoky) café, bookstore and culture center is the most famous of the new venues where young Budapest Jews hang out. Upstairs is an office of Marom, the Masorti youth organization, which runs frequent lectures, concerts and other programs in the café's upstairs gallery, its basement theatre or in other venues such as the big Godor music club at Deak Square. 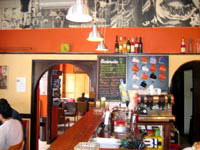 Just around the corner from the Dohany Street synagogue, Szoda is another popular hangout among young Budapest Jews. It describes itself as a "coffee house and fun place" and features big windows, '60s retro furniture, a dimly lit orange colored manga décor and free WiFi. It makes a good place to stop for a coffee or drink in the afternoon -- or rock out at night in the basement dance floor. 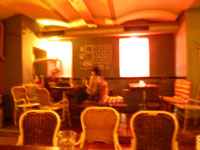 Szimpla and Dupla (Single and Double) are twin cafes featuring a funky, bohemian atmosphere that entails low lights and used furniture -- Szimpla only serves drinks and a few snacks, but Dupla has pretty good, inexpensive meals.The same owners run the much bigger and more ambitious Szimpla Kert at Kazinczy utca 14, which Time Out Budapest describes as a "nightlife institution" and The New York Times described as a "mainstay" of the trendy new District VII scene, "an enormous space with rough concrete floors and furniture that looks as though it had been dragged from yard sales, including a bathtub modified by cutting out one side and adding a few cushions to transform it into a sofa." Occupying the courtyard and first two floors of a vacant building, it is located just down the street from both Budapest's main orthodox synagogue and a mikveh, or ritual bath. Open til 3 a.m., it hosts movies, concerts and other activities. 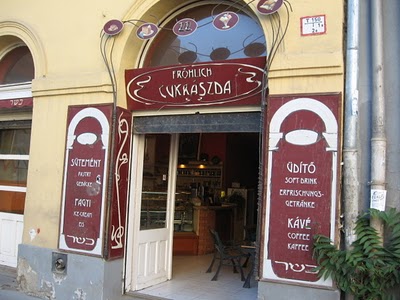 Located just across from the Dob utca entrance to the Kazinczy street orthodox synagogue, Froehlich's is a homey little café whose specialty is "flodni" - an ultra-caloric confection of honey, nuts, and pastry.

Bar Ladino's midday specials make it one of my favorite places for lunch. A two course lunch starts at about €4, depending on what you choose: last time I had a mixed salad starter and then roast goose with potato strudel and red cabbage. The people are friendly and don't seem to mind if you sit there all afternoon using the WiFi and, perhaps, sipping home-made lemonade.

Hanna kosher restaurant. In the Orthodox synagogue complex, entry via Dob or Kazinczy street
The patrons in this spartan eatery range from bearded Hassids to visiting Israelis to local teenagers. The food is simple home cooking, with an emphasis on roast chicken and brisket. Next to the Dob utca entrance to the complex, there is a kosher salami maker. 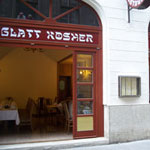 I remember the basement Carmel restaurant from its non-kosher incarnation, when the food was pretty disappointing... so I was very pleasantly surprised recently when I went there with a colleague who keeps kosher. Everything we had -- including the kosher wine -- was very good: meat, fish, side dishes, dessert, and even the Hortobagy meat-filled pancakes. 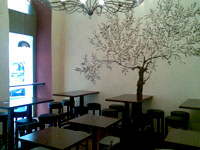 A very popular, hole-in-the-wall vegetarian take-away place (with room for sit-down dining upstairs). It claims to have the best hummus in town -- a big falafel pita costs only about €2.5

Tiny two-floor bistro with inventive cuisine, favored by an arty but somewhat older crowd than some of the other venues.

A casual restaurant with a hip vibe and varied menu, including great salads. It has a garden in a vacant lot for outdoor dining and also hosts concerts and art exhibits. 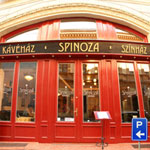 A cozy combination of cafe, restaurant and mini-theatre, Spinoza is less smoky, slight more upscale and caters to an older age group than some of the other places in the neighborhood. The three-course set lunch costs about €4 -- and can be delicious (oh, the pumpkin soup!). The programs in the theatre often have Jewish themes.

Kadar lunchroom, down the block from the market hall on Klauzal square.
Kadar is a legendary Budapest fixture where local pensioners and workmen rub shoulders with local celebrities whose photographs decorate the walls. The plastic-covered tables are crowded with folks digging into matzo-ball soup, boiled beef and pickles, and solet (cholent), the slow-cooked bean and barley dish traditionally served on the Jewish shabbos. At Kadar, you can get sholet with boiled eggs, sholet with beef, sholet with roast goose leg - and the decidedly non-kosher sholet with pork. Siphons of seltzer water sit on each table.