BUDAPEST -- Back in the early 1990s, I picked my way through Budapest's enormous main Jewish cemetery, trying to find the grave of Lipot Baumhorn, an architect who was long-forgotten but whose body of work once held pride of place in cities and towns the length and breadth of Hungary.

I followed a cemetery attendant past the huge memorial crypts of once-great families and through a forest of tombstones overgrown with shrubs, bushes, saplings and trees.
Baumhorn's tomb, a vertical slab more than two meters tall, was totally obscured by a wild growth of ivy. I pulled away the clinging vines to reveal the face of the stone. Under a poetic epitaph I found a long list of synagogues that Baumhorn had either designed or remodeled.
And at the top of the tombstone, depicted floating amid clouds, was a carving of the great dome that surmounts his masterpiece, the New Synagogue in the southeast Hungarian town of Szeged, a grand and eclectic building bristling with buttresses, spires, cupolas and other ornamentation.
Baumhorn, who lived from 1860 to 1932, built, designed or worked on more than two dozen synagogues. The epitaph on his tombstone describes his creations as "synagogues that look toward heaven and awaken piety."
Some of his synagogues were destroyed during or after World War II. But a number still stand, in one form or another, and over the years I have made it a point to visit them.
Most are -- or were -- highly ornate, and their size and grandeur bear witness to the pride and prosperity of Hungary's pre-Holocaust Jewish community. Many feature decorative brickwork and window arrangements of panes and panels cut and fitted into an arched form.
Baumhorn synagogues stand in most corners of Hungary, as well as in neighboring regions of Slovakia, Romania and Serbia. Visiting them is a good way to get a feel for the vitality of the Jewish world that was destroyed in the Holocaust. 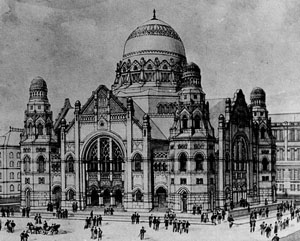 Budapest: Though born in the small town of Kisber, Lipot Baumhorn lived and worked in Budapest. One of his most ambitious designs was a competition entry for a massive new synagogue planned for the downtown Lipotvaros district, which never was built. Four of his synagogues and a huge family mausoleum still stand in the capital.

Pava Street synagogue
The most easily accessible of Baumhorn's Budapest synagogues is the one built in the 1920s on Pava St. Long empty, it has been fully restored and now forms the core of Budapest's new Holocaust memorial and museum complex, which open ed in 2004.

Synagogue on Dosza Gyorgy Boulevard
The large synagogue, built in 1908 on a busy traffic artery, features typical Baumhorn touches, such as rose windows and sweeping decorative ribbing around the gables and windows. It is used as a sports hall but retains the decoration on the inside of its dome.

Hegedus Gyula utca 55
Built in 1926-27 in a downtown courtyard and still used as a house of worship, this little synagogue was Baumhorn's first collaborative work with his son-in-law, Gyorgy Somogyi.

Betlen ter
This small prayer hall, located inside a big school building and built in 1932, was the last synagogue designed by Baumhorn (in partnership with Somogyi). It is still used as a house of worship. 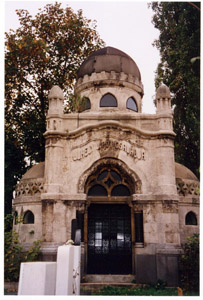 Baumhorn's masterpiece, completed in 1903, is one of the largest and most ornate synagogues in Europe. It has an enormous dome and sumptuous interior ornamentation. Still owned by the Jewish community, it forms part of a communal complex that also includes a small chapel. Baumhorn also designed the ceremonial hall in the Szeged Jewish cemetery.

Szolnok
Built in 1898-1899 on the bank of the Tisza river, this graceful, domed synagogue was seriously damaged in World War II and restored and converted into an art gallery in 1972. Its external appearance remains intact, but much of the interior decoration has been painted over.

Esztergom
Built in 1888, this was Baumhorn's first synagogue, and it is quite different from his others. Today used as the offices of a technical institute, it was constructed in the Moorish style and features bright orange stripes, a central dome, fretted Oriental style horseshoe arches and bulbous cupolas at the top edges of the rectangular facade. A small Holocaust memorial, a stark sculpture of an anguished human figure, stands in front of the building.

Keckemet
After earthquake damage in 1911, Baumhorn restored the main synagogue here (which is now offices, lectures halls and a gallery), adding a Lotus dome to its central tower.

Cegled
Built in 1905, this rather boxy synagogue with pale yellow brick outer walls was converted in the decades after World War II into a sports hall.

Baumhorn designed this synagogue in 1931, in partnership with his son-in-law. It has always reminded me of the Taj Mahal. Today, the synagogue is used as a furniture store, but many of the interior decorative elements remain surprisingly intact. 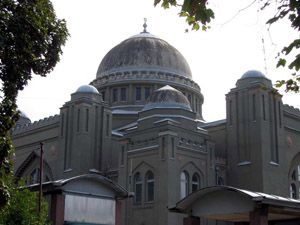 Nyiregyhaza
Built in the 1920s, this synagogue is still used as a house of worship by the local Jewish community.

Novi Sad, Serbia
This grandiose domed synagogue boasts vast arches, two massive, cupola-topped towers and a beautiful inner cupola. Built in 1906 as part of a Jewish communal complex, it has been restored for use as a concert hall.

Nitra, Slovakia
Built in 1910 and considered one of Baumhorn's finest designs, the synagogue has recently been totally restored and now houses a striking exhibition on the Holocaust. The structure features Baumhorn's trademark ribbing and brickwork.

Once one of Baumhorn's most magnificent creations, the huge domed synagogue has stood empty and ruined for many years, despite local efforts to restore it.
Liptovsky Mikulas, Slovakia
Baumhorn remodeled the interior of this neo-classic synagogue. 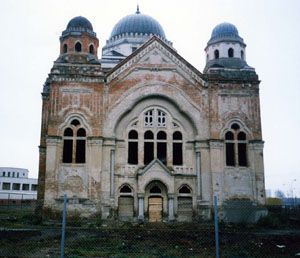 Brasov, Romania
Built in 1901, this grandiose synagogue is still used by the local Jewish community. There were celebrations in 2001 to mark its centenary.

Timisoara, Romania
One of Baumhorn's most ornate synagogues, the so-called Fabric synagogue was built in 1903 and features a tall dome, cupolas, massive arches and rose windows. It has stood in sad disrepair for years.